The Art of the Craft -Maryland Federation of Art, Sept., 2012

This historic English Elm stood for 200 years in front of what is now the residence of the minister of the First Presbyterian Church in Annapolis.

I felt like an eskimo on a giant iceberg considering an igloo.

The trunk section that was delivered to me, shown at left with eskimo, was 6 feet in diameter and weighed seven and one-half tons!

From a large Butternut tree harvested from the Naval Academy in September, 2011. The irregular black lines are a result of fungal decay known as spalting. (A German word for split or spoiled.) Spalting occurs naturally or can be encouraged.  This I did! Part of the “art” of woodturning, is knowing how to promote the development of character in wood.

Spalted Butternut with Walnut butterflies in rim and analine dye on the outside. This, and all the dyed pieces are finished with 12-15 coats of shellac, sanded very smooth, and a thin coat of varnish.

The Box Elder used in this piece was harvested from the Chase Lloyd house. The scolloping of the edge was done with a cutter mounted on a pivoting arm. The red line is produced by slicing off part of the rim (before scolloping) and glueing it back on with red paper between the severed pieces.

The Box Elder used in this piece was harvested from the Chase Lloyd house. The scolloping of the edge was done with a cutter mounted on a pivoting arm. The red line is produced by slicing off part of the rim (before scolloping) and glueing it back on with red paper between the severed pieces.

Persimmon -- from our farm in Davidsonville. It was on the ground and neglected by me for several years; well, neglected by me, but apparently not by the bugs! It’s a dense wood, related to ebony, and not used for much except golf clubs because it’s difficult to season. But patience wins out, and here it is!

Also known as “Nude in a Red Dress” and part of a series. You guessed it, number twelve in the series. Only the few in the series which have a characteristic profile get the “Nude ...” appellation -- this is a hint.

Actually, it’s more of an “unnatural edge”. The tree was on the ground entirely too long and was pretty rotten by the time I got it. If truth in advertising applied to this, the order of ingredients should have “epoxy” listed first, then “wood”.

“God never made an ugly piece of wood.”

Quote from the Author, Circa yesterday.

This is from the Wye Oak (1542-2002), an historic white oak from near the Wye river on Maryland’s Eastern Shore. After the tree succumbed to a storm in 2002 Maryland’s Department of Natural Resources contacted about 40 wood artists in the state to make objets d’art for a traveling exhibition. I provided a piece similar to this to the DNR. The next picture is of me unloading one of three pieces.

The Wye Oak was the honorary state tree of Maryland, and the largest white oak tree in the United States.

Located in the town of Wye Mills, Talbot County, Maryland, the Wye Oak was believed to be over 460 years old and measured 31 feet 10 inches in circumference of the trunk, 96 feet high, with a crown spread of 119 feet.

Pictured is Joe unloading one of three pieces of the Historic Wye Oak. 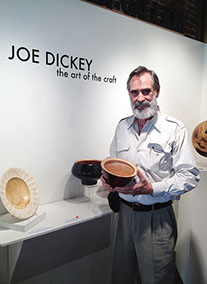 Almost all of the pieces presented in this Gallery Show have sold at the prices listed above. Joe can probably recreate one in the same spirit.  Contact Joe to learn about commissions.